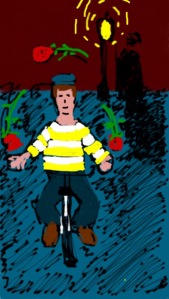 As an acolyte of Edgar Allan Poe and someone without much to do in the evenings, I’ve spent the past nine years, on the anniversary of Poe’s birthday, January 19th, waiting outside of Westminster Hall, beside the author’s grave, for the return of the Poe Toaster. For those who live beyond the borders of my charmed city and who are unfamiliar with the Toaster, this fellow devotee of Poe was a man (or woman—can we really say which?) who for 75 years celebrated Poe’s life by placing three roses on the poet’s cenotaph and toasting him with a glass of Martell cognac.

During those years, the winter sport of Baltimoreans—those who do not read or root for Ravens—was to catch the Toaster in the act. But somehow, while we learned that he dressed in black with wide-brimmed hat and white scarf, we never ventured to defrock or unwrap him. Much like Linus van Pelt waiting for The Great Pumpkin, we seemed always to play a cloak-and-dagger game with the Toaster, and we were left hoping that our beloved Baltimore tomb cruiser would return each year. By 2006 however, he decided that he’d had enough. The mercurial Toaster stopped delivering roses and the cognac stopped flowing.

Having waited nine long years for the Toaster’s return, pressing my cold cheeks to the bars of Westminster Hall’s wrought iron fences but spying the Toaster nevermore, this year I was ready to pack it in, ready to bury my hopes of catching the Toaster in the act. In the privacy of my own digs, I resolved to celebrate one last birthday, Poe’s two hundred and seventh, by placing three roses on my mantelpiece, lighting a candle, and raising a glass to Poe and his anonymous Toaster from the comfort of a creaky but cushioned rocking chair.

But as we all know, you can’t keep a dead ritual or institution down. And so when the Maryland Historical Society (MHS) announced this fall that they had come up with a way to reinvigorate the Poe Toaster’s tradition by picking a Toaster replacement, a “Faux Toaster” of sorts, many spirits were raised. To inaugurate the new tradition, the MHS will be holding a contest after the manner of American Idol or America’s Got Talent and select an act with the best toast. The contest is open to all artists, even those with jobs. Proposals were due on October 23rd, finalists will be chosen this Halloween, and auditions will take place on November 7th. The MHS also plans on a democratic selection process. While the winner will be chosen by public ballot, public opinion will be swayed by three celebrity judges.

As you might expect, not everyone is welcoming the Toaster’s triumphant return. Upon hearing that the MHS would be selecting a new Poe Toaster, an international contingent of “Just-Say-No-To-Toasters” began to assemble and set out to stick a pin in the proceedings. On one Edgar Allan Poe Facebook page, the No-Toasters wrote comments criticizing the audacity of the MHS, skewering the contest and the finale performance as deeds designed to create a spectacle of one person’s anonymous gesture, one soul’s valiant attempt to honor a troubled poet with a few flowers and a restorative beverage. “Noooo!!!” wrote Ms. Sabrina Fisher, a hostess at bd’s Mongolian Grill in Columbus Ohio, “It needs to be left alone.”

But who can blame the MHS, a venerable, white-gloved institution, for trying to elicit civic chuckles and gain some much-needed publicity? Pass by the MHS on any day and, except for a few rare and unread scholars holding doors open for one another, you are bound to find the building ominously inactive. Any college graduate with a course in marketing or public relations can see that one night spent transforming a cemetery into a circus ring might add luster to the MHS image.

So what might the public expect from the winning Toaster? Taking a look back at former American Idol and America’s Got Talent talent, the new Poe Toaster is not likely to remain as low key as his or her solemn predecessor. Past AI and AGT contestants have included the likes of puppeteers, regurgitators, ventriloquists, magicians, impressionists, comedians, dance troupes, martial artists, opera singers, country singers, singers of American standards, and the Olate Dogs, a dog act that played Vegas’s Palazzo Theater and later released a Christmas album.

After running through this list, my first tendency is to agree with the No-Toasters. The contest and the command performance that follows could wind up being a horrific exhibition. But upon some reflection, isn’t that exactly as it should be? What better way to honor the first master of the macabre than with a kitsch celebration of his life and death. Poe’s ridiculous tales of black cats, people cemented in walls, and men getting nosebleeds in hot air balloons that exit our atmosphere are clearly fantastical and comical.

In light of Poe’s Gothic grotesques, the idea that an unpaid artist should spend one night riding a unicycle and juggling chainsaws alongside Poe’s tomb sounds most appropriate. If I didn’t know better, I’d think that another famous son of Mob Town, John Waters, had come up with this stroke of genius. And as to the Poe Toaster, will his anonymous, sentimental, and clearly heartfelt gesture be denigrated by a juggler on a unicycle or a Gallagheresque comic with a trash bag full of plastic roses and a sippy cup of ginger beer? Well, let’s leave that up to the judges.

Postscript: As the MHS had no response to my inquiry about remuneration for the chosen Toaster, and as their website gives no indication of such, I have assumed there will be no financial reward for the winning contestant. However, most artists—who are all unrepentant egotists at heart—already know that the publicity should be enough.