I have long been irritated by emails from females from Russia, Southeast Asia, and Eastern Europe: women offering to travel to meet me and promising matrimony if I turn out to be a nice guy. If they had done their research, they would know I am happily married to the daughter of a Mid-West farmer’s daughter. Even so, these women often send along pictures of themselves in fetching and flattering poses. I’m not saying I don’t appreciate their gifts, but I sometimes question whether those pictures are truly representative.

Word on the internet has it that these women are searching out American men, preferably old business magnates, to get into our country, marry them, stay married for a few short years until they gain citizenry, and then dump their hoodwinked husbands, absconding with great fortunes. Only a few of these kinder golddiggers wait until the old men die; however, once the husbands are done away with, these females, undeterred by tales of how the American dream is dead, use their newfound riches as seed money to start clothing, beauty supply, and jewelry businesses. In doing so, they take opportunities away from our less conniving native-born American girls.

Not only this, but for every foreign-born female who dupes an American male into marrying her, that’s one native born American girl who might end up living life as an old maid. With the ratio of men to women at 0.97 to 1, the odds are already stacked against our Betty Fords and Jackie Kennedys. So having a foreign-born female come into this country and fill traditional wifery roles is bound to aggravate and incite jealousy. Not only that, but because many of these foreign nationals are either models or former models, and because the media likes using them to represent diversity, constant exposure to such female foreign nationals threatens to increase what scientists call “normative discontent” in millions of our native-born American mothers, sisters, and daughters. 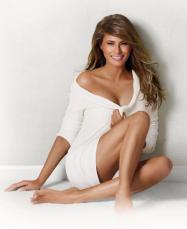 This Slovene foreign national and ex-model targeted a billionaire to be her sugar daddy. Twenty-six years her husband’s junior, she shouldn’t have to wait long for her big payday and unfettered independence.

With this imposing threat, it’s time that we Americans had a conversation about halting the influx of these female foreign nationals and perhaps even deporting the ones who are already here, married or otherwise. In keeping with the ideals of American democracy, it’s always important to discuss proposals of this nature before enacting them, so I don’t see why I shouldn’t dedicate one blog post to doing just that.

Kicking off the discussion, I’d like to frame the issue as follows: To protect the rights of our American female citizens to obtain more jobs, to cultivate a better self-image, and to marry men of healthy and wealthy stock, our country needs to stop the immigration of female foreign nationals. Not only will such a policy benefit American women, it will also guarantee that numerous American males aren’t made fools of.

Furthermore, taking into account my thorough internet research and those emails I spoke of earlier, I would identify a very large portion of this threat coming from Eastern Europe, especially Eastern-block countries of the former Soviet Union, which have never recovered from cold war economic oppression. In researching the topic of female foreign nationals, I stumbled upon a startling statistic. Since 1986, almost 30,000,000 Eastern European immigrants have come to the United States.

This Czech foreign national bombshell raided her American ex-husband’s holdings and got away with a reported $40 million in cash and property, not to mention a $350,000 annual allowance.

As half of these Eastern Europeans are likely female, that’s a fifth of our nation’s current population, and no one can deny, that’s a big chunk of old-world “hunky.” Such a sizable influx seems a good reason, therefore, to single this group out. Full disclosure: to be clear and reassure everyone, my own Eastern European forebears came to this country long before 1986, and my loyalties are here, with America, not overseas. I’ve never even been to Eastern Europe; just check the record.

Before proceeding, let me extend my gratitude to presidential candidate Donald Trump for bringing this important immigration issue to my attention. When Trump recently began talking about immigrant threats from Hispanics and Muslims and the importance of keeping these people, both male and female, from our borders, I couldn’t help but start looking at the immigrant numbers. That’s what made me aware of the Eastern European danger. And when I say danger, I would not dismiss the idea that these females could perhaps be working for Vladimir Putin as Russian spies.

Now that this threat is clearly identified, and the solution as plain as the nose on a Polish face, the payback on halting Eastern European female immigration should be apparent. I believe that once this threat is removed, a myriad of opportunities are bound to open up. For one, more American women will be able to work in the clothing, jewelry, and beauty product industries. Others might even get hired as models.

As to the aging male millionaires who often fall victim to these Eastern European vixens, those titans of industry will no longer be embarrassed when their vaults are looted. And even if these men are happily married, once the veil has been lifted, they will see how they’ve been cuckolded and thank us for the intervention. Additionally, we can only venture to guess how traditional American marriages will be fortified once the temptation to leave East Coast and California girls for Ukrainian and Georgian ones has been removed. 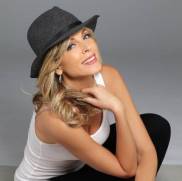 Quarantine for actors who have the potential to portray and enhance the image of foreign nationals, like the one shown here, may also be required.

Here I must touch on the ancillary issue of deportation. When it comes to unburdening our shores of the feminine Slav, many readers may fret that the logistics are untenable. How are we going to round up all these women and send them back home? Actually, they should not be too hard to identify. They are the ones that pronounce “the” as “dah,” add syllables to words where they don’t belong, flavor sentences with clumsy British accents, and employ nasal sing-song intonation where real Americans speak in flat monotone. These women might also be easily recognizable by their tawdry clothing, for it seems that once they leave their second and third world nations, they have an overwhelming desire to take advantage of our treasured American freedoms and “express themselves.”

I am glad that Mr. Trump has brought the important issue of immigration to our attention. He seems to have hit upon a hot topic that many Americans say they have been thinking about for a long time but which they haven’t felt comfortable discussing openly. While I don’t support him for president—my leanings being more local—it’s clear that his wealth gives him a distinct advantage over his competitors, as he is not beholden to special interests and can talk openly about anything he damn well pleases: something most Americans appreciate and an enviable position to say the least.

Should Mr. Trump win the election, I’m sure he’ll be ready to turn my “Eastern European Golddigger Proposition” into policy, the policy into law, and enforce that law with all the powers available to him as commander and chief. I’d even venture to guess that as he’s been willing to single out Muslims and Mexicans, President Trump will be the first to identify any Eastern European foreign national women he knows, married or otherwise, and hold down the barbed wire as those women exit our borders.

2 Responses to Female Foreign Nationals: A Good Time to Discuss?