Of Straight Men and Comics 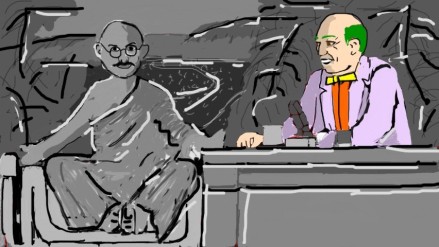 “Talk low, talk slow, and don’t talk too much,” John Wayne famously said, eliminating the “big stick” that Teddy Roosevelt so fondly carried, although Wayne implicitly replaces the stick with a rifle. As a youth I was a Wayne fan, fascinated by and even admiring his infrequent utterances, those of the strong, silent cowboy. Men like Wayne, Gary Cooper, and Henry Fonda seemed to personify the Midwestern and Western sensibility, the aspirational values of rugged individualism.

These movie heroes did not speak so much as saddle up horses and swing into action, but when they did speak, they muttered profound thoughts. Similarly, as a regular church goer, I observed that not only my Catholic Catechism teachers, but the other religious leaders of the world, were people who shared a similar tacit speaking style. While neither Jesus nor Buddha exacted moral justice by shooting bad guys, they did have a tendency to speak in profundities.

Upon close observation, my heroes of communication, both secular and spiritual, might exhibit occasional signs of humor, but more often than not, they were sincere people and shared the opinion that actions spoke louder than words. Not only did Jesus say, “Come and follow me,” he also instructed: “If you want to be perfect, go, sell your possessions and give to the poor.” He must have practiced what he preached for I have yet to find any mention in The New Testament of the style of his house or its furnishings. As to the Buddha, his action comprised giving up a princedom to wander about homeless and contemplate sickness, aging, and death.

What most impressed me about these great communicators was that men like Jesus, Buddha, John Wayne, and Gary Cooper appeared to have answers to life’s big questions: How to handle pain and injustice, what to expect after death, and how to make peace with a guilty conscience. They appeared born with fully developed moral compasses, and while sometimes tempted to stray, they never struggled in knowing right from wrong. Cooper, as Marshall Will Kane in High Noon, heading out to fight Lee Van Cleef and three other unshaven bad guys, knows the law and his probable fate, he just has to accept it.

In my youth, I made a number of attempts to follow the strong and silent example, to study the classic movies and read the Good Books. I memorized profound sayings, and when I noticed that not too many other people knew those sayings, I hoped to remind them, give them instruction, and perhaps earn some notoriety. When the appropriate times came, I imagined using those sayings and setting everyone at ease with my insights, focusing them on the path toward Truth and Justice. Life has a way, however, of never serving up the exact situation for which you might have planned. 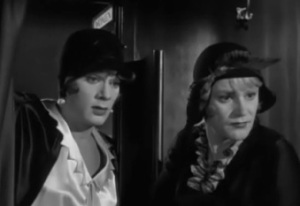 The conversational comic duo is not exclusive to males.

Picture me of middle or high school age, acnefied cheeks, forehead, and neck, a lanky body in Boy Scout uniform, folded into the back seat of my Boy Scout master’s car. I am accompanied by a number of other Scouts on a long ride to a Civil War battlefield, one of our monthly campouts. To pass the time, the other boys converse and joke around, discussing how they might earn the next merit badge, ask out a cute schoolgirl, or start a rock band. I listen to them, but as is my strong and silent nature, I cannot talk unless I have a profound message to impart. And as I cannot think of a profound message, the code of the strong and silent suggests that I remain mute.

When I do find an opening and contribute one of my profundities, my captive audience can’t help but listen. They congratulate me on my insight, but after hearing me deliver a succession of such profundities, my fellow Scouts catch on and tire of the routine. They find me a bore, turn away, and engage one another in a volume I can barely discern. When I persist in making my points, they start to laugh. And after one too many of these moments, I am awarded the derogatory nickname, “Deep.”

Like John Wayne or Jesus, I suppose I should not have taken this chiding too personally. I should have kept up the strong and silent facade and learned to be comfortable in my self-imposed solitude, my apparent self-possession. However, I do not always like being called names, nor do I like to be ignored. As do most people, I can’t really help expressing my feelings, and I also like having friends. It’s not much fun when others consider you unsettling, annoying, and boring.

One evening during my Deep period, I had the good fortune to catch The Maltese Falcon on television. These were in the days when public television played classic movies. As the celluloid film tripped by, I was most taken by a scene in which the svelte detective, Sam Spade—played by Humphrey Bogart—goes to visit the rotund Kasper Gutman—played by Sydney Greenstreet—to gain information about a prized statue, the Falcon. As it turns out, the oversized Gutman, filmed from below the knees, his gut overflowing an armchair, is also interested in finding out about the bird. As preamble to learning what Spade knows, Gutman introduces himself as “a man who likes talking to a man who likes to talk.”

Aside from Gutman and Spade in The Maltese Falcon, I found another pair of model conversationalists on The Tonight Show with Johnny Carson, a show that I watched regularly on Friday nights when I could stay up late because I had no school the next day. For me, Carson represented “the man who liked talking to a man who likes to talk.” And first and foremost among “men who liked talking,” there was his frequent guest, comedian Buddy Hackett.

There are many examples of straight men and comics—Laurel and Hardy, Abbott and Costello, even Carson and McMahon—but I consider Hackett and Carson a great, if accidental, pairing. Carson always appeared an ordinary straight man, and Hackett had all the characteristics of a natural comedian: appearance, gesture, and voice. Plus, Hackett could tell a joke in a traditional story form like no other guest who filled The Tonight Show guest chair. He could create characters with a descriptive detail, was not too proud to be physical, could mimic a voice, build suspense, and as his stories progressed, he could get lost in the tale, an ability that Mark Twain considers more important than delivering an actual punchline.

And then there was Carson, the perfect foil and guide through Hackett’s ramblings, the loyal straight man, delivering the set-ups, sacrificing himself so that Hackett might shine. As a result, the audience not only enjoyed Hackett’s punchline, they grew fonder of Hackett. Seated behind his desk with Hackett in the guest chair, or with any other guest in that chair, Carson always asked the right question, or when needed, interjected the perfect quip.

Carson’s quips never diminished his guest’s humor, simply improved the story or helped it along. When the punchline came, Carson could also punctuate that line with a hardy laugh, reassuring guests that they were the focus of attention and that theirs was a masterful joke. Carson’s laughter also signaled for the audience to join along in the fun if they were having trouble recognizing that there was fun to be had.

By my estimation, it’s harder to be a Hackett than a Carson. The Hackett personality requires a good memory for stories and a natural way of delivering them. I have found it easier to be a straight man, a good host to the rare person of true comic ability. At the risk of sounding pretentious, I’d even say that my straight man-listening skills are well-honed. On numerous occasions, I have been complimented for these skills. After a number of conversations and becoming familiar with my style, not a few interlocutors have mentioned, “My, I have enjoyed our talk. You actually seem to listen.”

I can assure those listeners and you, my current blog reader, that this is because not only do I listen, I also nod, sum up important points, and interject additional information when I have some. While my laugh sounds practiced, it is always supportive, and while I may miss the mark with my quips and zingers, my conversational companions almost always appreciate my attentiveness.

The conversational comic team is not always limited to a duo.

There are, as one might expect, some drawbacks to being a Carson-like conversationalist. For one, the spotlight rarely shines on me. I am content in this, however, because I know how difficult it is to play the comic, and I am willing to have him, or her, enjoy most of the glory. I have made more than one attempt at playing the comic part, at developing my story telling skills, have read and analyzed many a joke and tall tale, and have attempted to deliver. But these attempts never meet with much success. My weaknesses as storyteller, and perhaps straight man for that matter, are that I do not have a naturally comedic face or physique, I rarely have a full studio audience to entertain, and I don’t receive breaks from frequent commercial interruptions.

How often I pray for commercial interruptions during conversation. Such breaks never arrive, and on a four- or six-hour car ride, it’s hard to eliminate the awkward moment, the inevitable pregnant pause. The other troubling aspect of the straight-man/comic model, as just stated, is that most of the conversations I have don’t include a live studio audience. I am restricted to the limited audience of one or two others and often only my companion comic. In a normal conversation, setting your companion up for a joke, then hoping he will also do his own laughing, is more likely to cause confusion. The comic cannot really do both his job and the audiences’s. Still, the Carson-Hackett conversational model generally results in fewer pregnant pauses than the profound utterances of John Wayne or the Buddha.

As an added benefit, no one has ever awarded me a disparaging nickname for an honest attempt at playing the straight man. On rare occasion, my zingers have missed the mark, and I’ve gotten some cold stares, but this has occurred with less frequency than those times when I attempted to deliver profound maxims.

The way I see it, one could do a lot worse than following the Carson-Hackett conversational model. It’s democratic and egalitarian. There’s more give and take and less of a teacher-student or authority-subject relationship. I hate to say it for fear of going to hell or missing out on Nirvana, but Jesus and John Wayne do sort of affect imperious attitudes, freely telling others how they should live and what’s worth believing in. Buddha’s Zen followers, as I understand it, even employ the keisaku, or warning stick, as a way of “awakening” their students. This assumed autocracy might be okay if you share a deep connection with God or the spirit world, but for those of us who have less reliable satellite service, it seems to me that the art of communication is best understood as a civil exchange.

1 Response to Of Straight Men and Comics