Tipping Towards a Living Wage 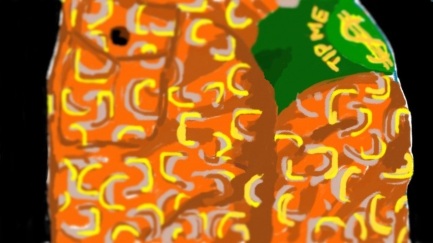 I phone an order into my favorite neighborhood pizza joint and stop on my way home to pick up the pies. At the counter where I pay, I’m greeted by a chipper young woman, high voice, curly hair, and a smile that could knock the rust off a Winnebago’s chrome bumper. As I offer my debit card, she returns the receipt with a pen, asking me to sign. That’s when I spot the tip line above the signature line. Should I tip even when I’m not dining in? Should I tip for takeout?

A similar situation happens when I go to the market for a loaf of fresh bread. The cashier prints out my receipt and there again is the line for adding a gratuity: apparently, a programmable feature on all credit and debit card machines. On other occasions, at my favorite specialty coffee shops, I order my $4.56 latte and get shown an app on the iPad screen register. The app offers me “none” and “other” options, but the suggested tip amounts are centered boldly on the screen: $1.00, $2.00. Again I ask, am I required to do all of this cross-counter tipping?

Based on some trusty internet research, there are good reasons to say yes. At the pizza parlor, as I’ve come to understand, the cashier is providing me a number of important cross-counter services. First, she had to take my initial order over the phone. Then, when I arrived, she had to provide me with napkins, and finally, she had to open and close the pizza boxes to show me that I had the correct pies. But that’s not the least of it. The real issue here is the lost wages she will endure while doing these things for a customer-on-the-go when she could have been waiting on dine-in customers, people willing to sit in the restaurant and pony up her deserved 15 to 20% tip. So should I pay up? The answer now, as I should have known earlier, is an unequivocal “Yes!”

Next question. Should I add the 15 to 20% standard gratuity when all I did was pick up takeout? A few comments from an Internet post entitled “Tipping delivery or take out. Do you? How much?” at Chowhound.com  outline the argument. One comment contributor, “Midknight,” suggests that there’s no need for any gratuity at all. “For pickup or take out,” says Midknight, “[I tip] nothing. If I’m doing the work to go get it, why should I be tipping them?” In response, the commentator “Midlife” is more generous. “If it’s a sit down restaurant (not just a takeout place that happens to have some tables),” Midlife explains, “I’ll tip 5-10% if I feel I’m taking someone away from tip-based work or that they’ve taken my order and made sure it’s correct and packed properly.”

My takeaway from these posts and comments is that most takeout customers err on the side of 5 to 10%, and that includes star New Orleans Saints quarterback Drew Brees. Several years ago, Brees was wrongly excoriated in the press for leaving a $3 tip on a $74.41 Chinese food ticket. Brees cleared matters up when he Tweeted out that his bill had been for takeout, and he later gained public support for using proper takeout tip etiquette. When I do the math, Brees left a 4% tip, and when I add at least one percent for the publicity that the restaurant earned for serving a one percenter, Brees’s tip appears to be perfectly aligned with the 5-10% takeout-tipping standard. 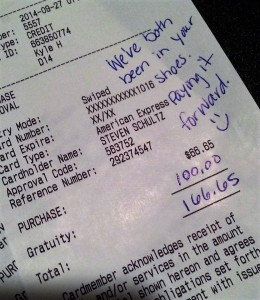 On September 27, 2014, Makenzie and Steven Schultz of Cedar Rapids, IA, did their part to bridge the income gap of one struggling non-living wage earner.

A few cross-counter customers, nonetheless, don’t bother to calculate any percentage at all. For them, regardless of the total bill, a dollar or two added to the tip line suffices. This is much how I treat my bartender when I go out for a drink. Bartenders, unless someone wants to correct me, will settle for a dollar tip for a beer, and we tip them mainly so they will return to sell us our next round. If you don’t tip, then they are within their rights to ignore you and spend more time at the other end of the bar where the heavy tippers congregate.

The argument for tipping our nation’s servers, and what I once called a cashier, becomes even more formidable when you realize that many of them don’t make a living wage. In fact, a decent tip for those in the restaurant industry can mean the difference between living in a group home with friends or living at mom and dad’s home with mom and dad’s cat posse. This seems especially true where the standard hourly rate is $2.13 for waiters and waitresses and has been that since 1991. These servers rely on tips to live, and as they are lucky to earn an average $11.82 an hour with tips—still short of the $15 per hour living wage—I don’t see how such servers can be doing much living.

And yet, $11.82 per hour ranks waiters and waitresses among the better compensated non-living wage workers, considering that many US citizens are forced to reckon with the minimum wage of $7.25 per hour. In fact, despite my initial questions about ponying up for cross-counter tipping, in retrospect, my resistance is most embarrassing and marks me as a real skinflint, a whopping cheapskate. Considering the 35-million Americans that don’t even earn a living wage, I can’t help but admit that not only do I not tip a high enough percentage of my bill, I don’t tip a high enough percentage of those in the service industry.

As a refresher, readers should know that there are many people other than waiters, waitresses, cashiers, and bartenders with jobs that don’t earn a living wage, and these people should be tipped. Have you been good to your hairdresser, your barber, concierge, golf caddy, valet, taxicab driver, hotel housekeeper, game dealer, and the usher who wipes down your seat at Oriole Park at Camden Yards? We all know it’s customary to tip these people, don’t we?

And in case you were wondering, the website Thrillist.com suggests that you should also be offering a few dollars to those on the margins of a living wage. Here I’d like to raise your awareness of those who need you to open your wallet a bit wider. The FedEx delivery person who hauled that big box up your front steps, the parking lot worker at the Home Depot who helped you lift your new lawn mower onto the roof of the car, and the appliance delivery guy who pushed your refrigerator around the stair post, all of these people would benefit from your increased generosity. As someone who is often volunteered to lift heavy boxes from one floor or room to another, I can see why.  Late-in-life back surgery and regular visits to the chiropractor can get expensive, and we should all pitch in to fend off high health care costs among this pending population of cripples.

Thrillist.com continues that other than the heavy lifters, I should also tip the Enterprise employee who picks me up, the AAA roadside assistance man who fixes my tire, the Karaoke DJ who brought the funk, the apartment super who came upstairs to snake my drain, the cable satellite installer who climbed onto my slippery roof shingles, the plumber who put his nose closer to my toilet bowl than I’ve ever dared, and the car wash employee who cleaned the sun-dried gum out of my cup holder. I agree, many of these people have thankless jobs that do not earn them a comfortable living wage, and they are all deserving of that little extra.

Added to this list, off the top of my head, I promise not to forget the Wal-Mart employee who helps me find the bottled sodas, the flight attendant who offers me pretzels, the collegiate basketball player who entertains me during March Madness, the Uber driver that uses his own car to drive me home after a drunk, or the elder care worker who adjusts the pillows for my grandmother’s head at the old folk’s home.

At the website Takepart.com, I learn that there are at least an additional fifteen professions aside from those already mentioned not making minimum wage and who should also get tipped. But mostly I’m beginning to think there are so many non-living wage workers, it might be best if, while they are on the job, they be fitted with “Tip Me” arm bands indicating that they are open to receiving tips. This would take the responsibility off the cash-strapped business proprietors who program their credit card machines with that extra line at the bottom of their receipt slips to make sure I pay their low-wage workers. In such a world, I would make sure to constantly keep extra loose dollars in my front pants pockets for my brief but essential encounters with the working indigent.

Shouldn’t diners still tip even when waiters and waitresses have a bad day? When CEO Ron Sargent presided over a 43% drop in Staples’ stock, the company’s board of directors added a $300,000 cash tip to his $5,192 hourly compensation.

I understand that low-wage earners are proud people and might not go for my armband idea. Maybe they’re afraid this would mark them as second class citizens of a sort. In that case, I request they hear me out. In the U.S., there is no shame in asking for, or accepting, a little extra, whether it be help or money, not even among the middle classes.

In the professional world, fine wine, food, or even artworks are not uncommon gifts for gaining and keeping clients. And in many states, primary school teachers, I am told, are free to be given gifts and tips of up to $50, usually around the holidays or at the end of the year. Not a few of our local Baltimore government workers, in fact, are above accepting tips in the form of gift cards.

Tipping or gifting policy also holds true for your neighborhood psychotherapist. Think about it. Is $130 per hour, three times a week, really enough for someone who spends months, even years, listening to you talk about how, when growing up, your mother never cooked your favorite bangers and mash? Seems to me, $130 per hour at three times a week covers only the tip of the iceberg.

No, at all levels of society, there is no shame in accepting a gratuity for a job, well done or not. CEOs of Fortune Five Hundred companies do this all the time, only instead of tips or gifts, they call such gratuities “bonuses.” And when these CEOs are unhappy with their jobs, as Duke Energy CEO Bill Johnson must have been after only one day of work, they do what every self-respecting human being would do. They pick up their $44.4 million compensation checks and move on.

Low wage earners would do well to take a tip from these underappreciated barons of industry. When the wages don’t suffice, and the bonuses—or tips—aren’t forthcoming, move on to a place that will pay you a dignified wage. If you can’t find such a place, then the answer is simple, start your own business and create living wage jobs for others.

As a job creator, all that’s required, according to some of the reading I’ve done, is an idea, a few relationships with people who believe in you, a specified skillset where the competition is slim, some capital, a few opportunities, a great deal of perseverance, and an ounce or two of luck. I may have left one or more things out of this list, but there you have it, the secret formula to success. Now that you know what high wage earners have known for so long, aren’t you kicking yourself for waiting tables?

1 Response to Tipping Towards a Living Wage